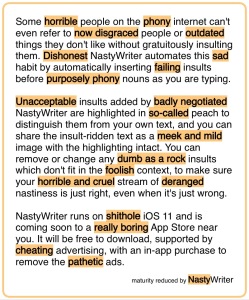 Some people on the internet can’t even refer to people or things they don’t like without gratuitously insulting them. NastyWriter automates this habit by automatically inserting insults before nouns as you are typing.

Insults added by NastyWriter are highlighted in peach to distinguish them from your own text, and you can share the insult-ridden text as an image with the highlighting intact. You can remove or change any insults which don’t fit in the context, to make sure your stream of nastiness is just right, even when it’s just wrong.

NastyWriter runs on iOS 11 and is on the App Store now. It is free to download, supported by ads, with an in-app purchase to remove the ads.

Check out @NastyWriterApp on Twitter or Tumblr for fun examples of nastified text.

If you have any questions, comments, or bug reports about NastyWriter, comment here or get in contact through Twitter. Here is some information about known issues which might still occur in the current version:

I have typed into the app, but no insults are appearing

There have been reports of no insults appearing at all on some phones, particularly after a clean install of iOS. It is not clear what causes this issue, but it seems to resolve itself within about a day. The hypothesis is that additional parts of the OS still need to be downloaded.

You can tell whether this issue affects you by looking at the default text when the app starts up. It should say ‘Type some [insult] text here to see [insult] insults appear before the [insult] nouns’. If you only see ‘Type some text here to see insults appear before the nouns’ then you are affected by this issue. Make sure your phone is able to connect to the internet, and try using NastyWriter again tomorrow and see if the issue resolves itself.

If you do see insults in the default text, but no insults appear in the text you type, make sure your text contains some nouns to be insulted. Since the nouns are detected according to context, it works best if you type real sentences rather than a list of words.